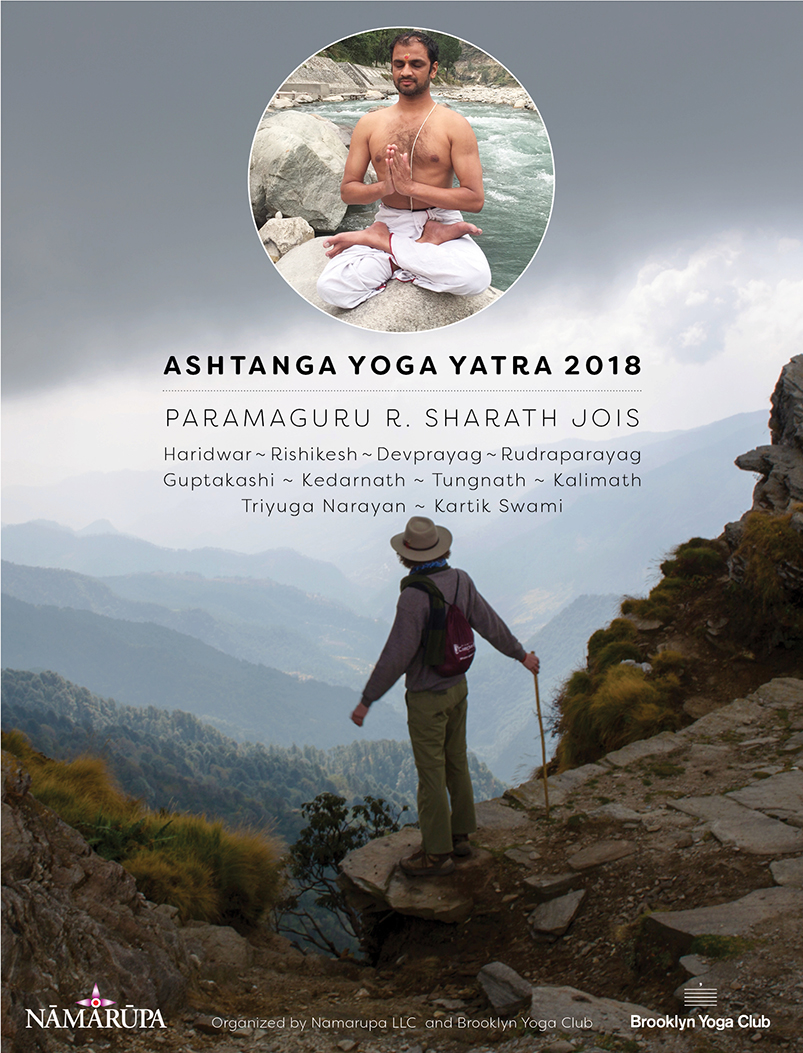 THE ASHTANGA YOGA YATRA 2018 HAS BEEN SUCCESSFULLY COMPLETED
CHECK BACK HERE FOR VIDEOS AND PHOTOS – SOON!

Ashtanga Yoga Classes will be led each morning by Paramaguru R. Sharath Jois from October 15-20, 2018. Held on the spacious covered open air platform right next to the Ganga at Parmath Niketan in Rishikesh. A range of accommodation is available in the ashram. Vegetarian meals will be provided. Each evening Ganga Arati and kirtan is held at the ashram’s ghat. You will have time to explore Rishikesh and environs during the day.

Then from October 21-28 we will proceed with Sharath on Yatra. …

Yatra The ancient Puranas of India are huge volumes containing stories of the makings of the universe as well as thrilling tales of innumerable gods and goddesses. Countless places mentioned in these ancient texts are fully alive today and are important places of yatra (pilgrimage). There are temples at these places and within their sanctums worship of the resident gods and goddesses is performed daily. These places where the sacred stories unfolded are called tirthas; the confluences of sacred rivers are called prayags.

Tirtha is a place of crossing over and most literally refers to river fords. It also refers to a spiritual crossing place, where the divine is more easily intuited or experienced. Daily, vast numbers of yatris (pilgrims) visit the sacred places to have darshan of their favorite gods or goddesses. Darshan is both seeing and being seen by the deity. It is a source of spiritual renewal.

Prayag is a confluence of rivers, usually two, sometimes more—as in the case of the most famous prayag, at modern day Allahabad, where the Ganga, the Yamuna and a third river, the unseen Saraswati, meet. Prayags are places of particularly powerful spiritual influence where pilgrims go to bathe away their sins, purify and heal their bodies and minds, pray for their ancestors, perform rituals, and possibly meet saints who frequent the prayags. We will travel as pilgrims and bathe in two of five famous prayags. Water is purifying on so many levels: physically, emotionaly, mentaly and spiritualy. It has been recently discovered that water molecules have a ‘memory’* that carries the vibrations of sounds (prayers) and even thought waves along with its flow from source to ocean. (*Aerospace Institute in Stuttgart, Germany)

Temples There are Five Kedars, places sacred to Lord Siva in the Garwhal Himalayas. The Pandavas were seeking darshan of Lord Siva to request absolution from their sins commited during the Mahabharata War. Siva was hiding from them at Guptakshi in the form of a bull, Nandi. Bhima saw him but Nandi dove into the earth, whereupon Bhima caught hold of his tail in Kedarnath and Nandi’s hump is now worshipped there as a Jyoti Lingam. His arms appeared at Tungnath which we will trek to. Other Kedars are too remote to reach on this yatra. We will also visit Kalimath, a Sakthipeeth where Kali is worshipped as a Sri Yantra, Triyuginarayan where Siva and Parvati got married and a havankund has been burning for three yugas and lastly Kartik Swami, the only temple to Siva’s son Kartikeya in North India. All these temples are situated in places of power and natural beauty.

1861 book by the artist George Catlin in which he

The seat of Prana is the Heart ❤️. New Pranaya

Gayatri mantra at dawn 🌞 from Eagle 🦅 Rock i

After the long winter we have flowers 🌸 confirm

In our pranayama class we practice Brahmari to ton

Load More...
This error message is only visible to WordPress admins