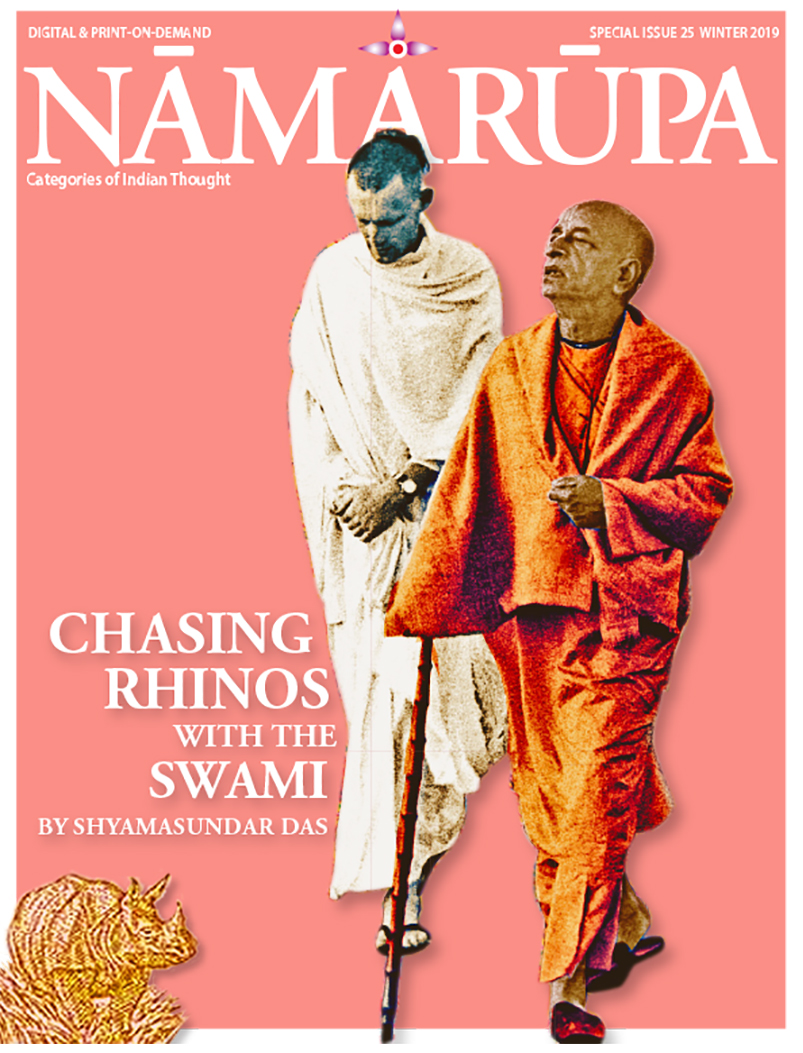 The whole Special Issue 25 of Namarupa is composed of book excerpts from the Chasing Rhinos Series, Volumes 1 & 2 and Shyamasundar das’s commentary on the excerpts. It is filled with amazing and beautiful historical photographs. For those interested in the roots and history of the current wave of Indian thought across the world this issue is a must read.

“Get Ready for Chasing Rhinos with the Swami! Shyamasundara is about to take us on an incredible adventure into events that transformed our world. We will be witness to unimaginable events, events that made history, while we live side by side with Prabhupada, a humble saint who awakened spiritual love in countless hearts. This book is masterfully written and is truly unique.” H.H. Radhanath Swami

Russell Brand says, “You’ll not take away MY Chasing Rhinos!”

Shyamasundar das beautifully narrates major moments in spiritual and material history in his series of books, Chasing Rhinos with the Swami, Volumes 1&2. He invites readers on the ride of his life, behind the scenes to the first words Srila Prabhupada spoke to John Lennon, his thoughts on the moon “landing’ and how Krishna would pierce the Iron Curtain. As A.C. Bhaktivedanta Prabhupada’s personal secretary, Shyamasundar das circled the globe with the Swami spreading Krishna Consciousness throughout North America, Europe, Russia, Africa, Australia, New Zealand, Hong Kong, Japan, India, and more.
ABOUT THE AUTHOR …“I was born in the body of Samuel Speerstra, in Salem, Oregon in May,1942. From early childhood I thrived on adventure and risk. After graduating from Reed College in 1965, I met Bhaktivedanta Swami in San Francisco in January 1967, and immediately became his disciple Shyamasundar das. The Swami wed me to my girlfriend Melanie (Malati devi dasi) in a smoke-filled storefront in Haight-Ashbury we called the Radha-Krishna Temple. In 1968, to please Swamiji, I traveled with five chosen devotees to London. There, we witnessed first hand Krishna’s magic display; we befriended the Beatles and, courtesy of Apple Records, spread Hare Krishna Mantra around the world. In October 1970, the Swami took twenty of his Western disciples to India, and together—as Prabhupad and his Dancing White Elephants—we barnstormed the country. In June 1971, Prabhupad accepted me as his Personal Secretary. I was by Prabhupad’s side, day and night, in Europe, USA, Africa, Asia, Australia—even behind Brezhnev’s Iron Curtain. I never saw him sleep, I never saw him make an error of any kind. How did I get this lucky, to observe close-up the life of the Perfect Person? Srila Prabhupad, the Magic Man himself!”

VOLUMES 1 & 2 OF THESE BOOKS ARE AVAILABLE AT www.chasingrhinos.com
Each volume is 500 pages, with hundreds of rare and unseen photos. VOLUME 3 to be released in 2020.