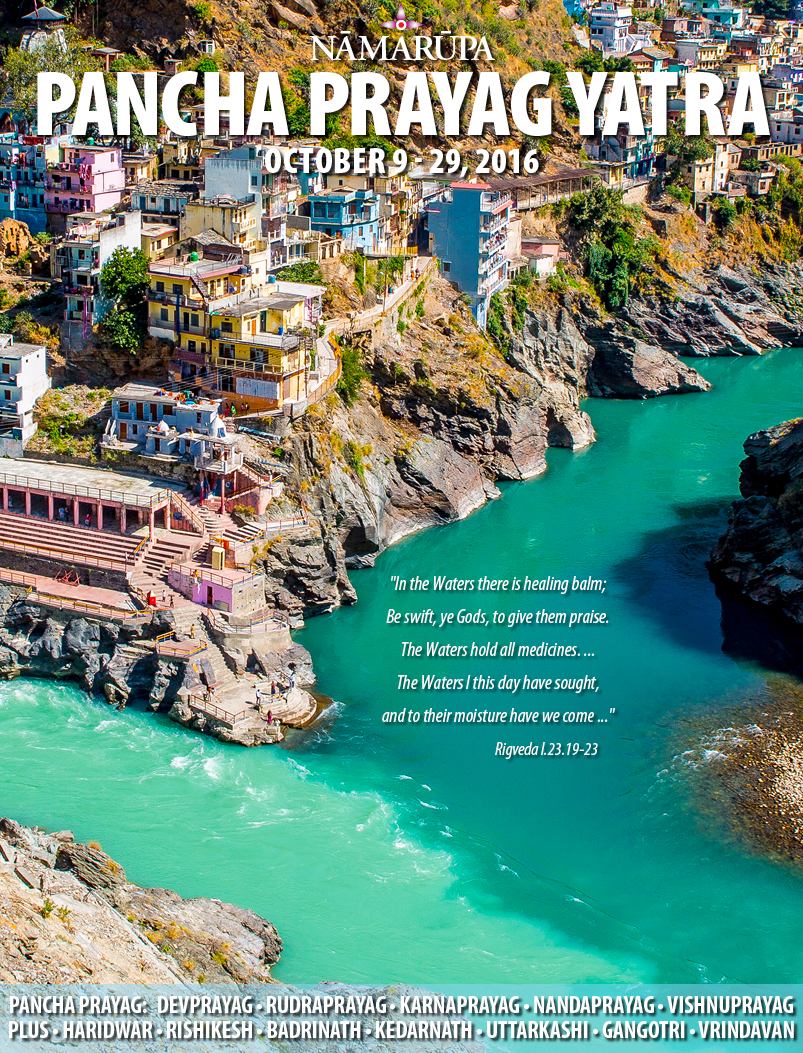 Our main purpose will be to travel as pilgrims via Haridwar and visit the Pancha Prayag (5 Confluences) of the Garwhal Himalaya. We will bathe in each of these prayags before worshipping Lord Vishnu at at the sacred shrine of Badrinath. Water is purifying on so many levels: physically, emotionaly, mentaly and spiritualy. It has been recently discovered that water molecules have a ‘memory‘ that carries the vibrations of sounds (prayers) and even thought waves along with its flow from source to ocean.
The ancient Puranas of India are huge volumes containing stories of the makings of the universe as well as thrilling tales of innumerable gods and goddesses. Countless places mentioned in these ancient texts are fully alive today and are important places of yatra (pilgrimage). Often there are temples at these places and within their sanctums worship of the resident gods and goddesses is performed daily in a tradition that reaches back to antiquity. These places where the sacred stories unfolded are called tirthas and most literally refer to river fords, but also to a spiritual crossing place, where the divine is more easily intuited. The confluences of sacred rivers are called prayags, places of particularly powerful spiritual influence where pilgrims go to bathe away their sins, purify and heal their bodies and minds, pray for their ancestors, perform rituals, and possibly meet saints, or simply sit spellbound in the natural beauty and peace.
There are also Five Kedars, places sacred to Lord Siva in the Garwhal Himalayas. The Pandavas were seeking darshan of Lord Siva to request absolution from their sins commited during the Mahabharata War. Siva was hiding from them at Guptakshi in the form of a bull, Nandi. Bhima saw him but Nandi dove into the earth, whereupon Bhima caught hold of his tail in Kedarnath and Nandi’s hump is now worshipped there as a Jyotilingam which we will visit. His arms appeared at Tungnath to which we will also make the trek.
Then we will cross the Garwhal Himalayas to Uttarkashi, home to many sages and ashrams, where the swayambu lingam of Lord Vishwanath has arisen. We will journey to Gangotri to bathe in the Her waters and have darshan at the Ganga Mata temple. Our return journey will take us through Rishikesh and then by train to Mathura to visit Vrindavan and so many temples of Sri Krishna and Radha.

One flower supports a universe!

Will be back to regular puja schedule at 6:30 am E

From @satya.mo Dear friends and family of New Eng