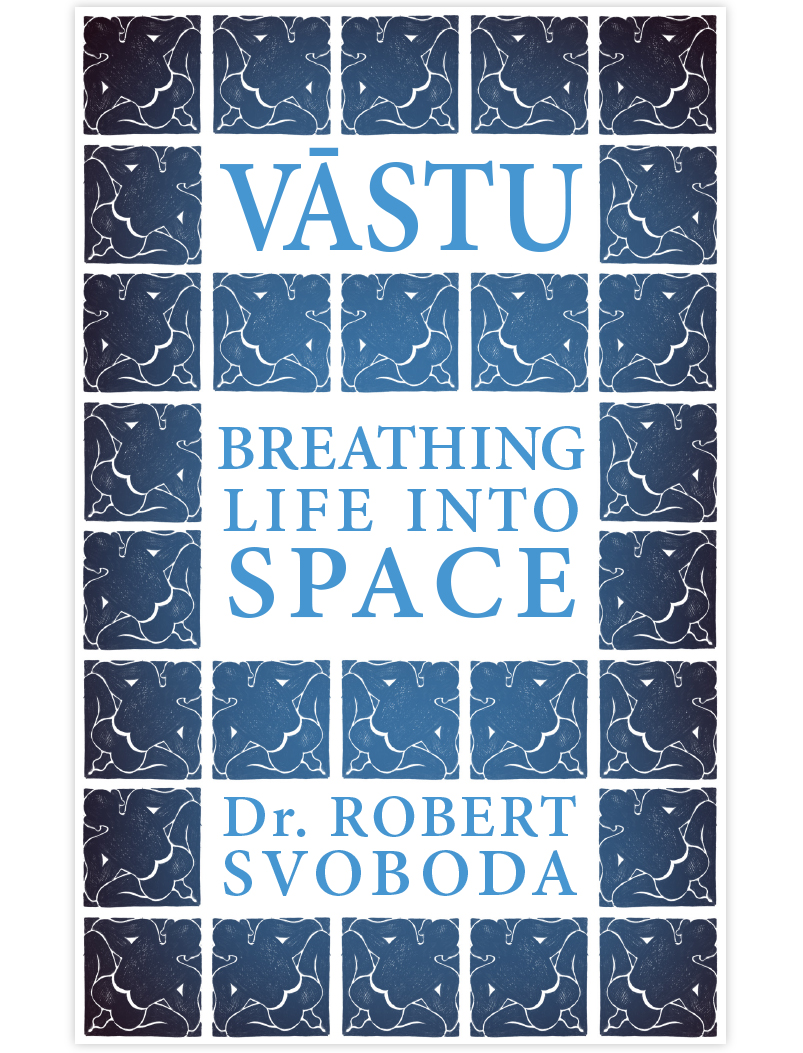 Now in the 2nd printing with a brand new cover design by Satya Moses.
In previous books, Dr. Svoboda has helped us learn to cooperate more harmoniously with Nature through the Indian sciences of Ayurveda and Jyotisa. Now, in Vastu: Breathing Life into Space, he continues to improve our odds of achieving health and happiness by introducing us to the principles and spirit of Vastu Shastra, India’s Feng Shui” Dr. Claudia Welch, Doctor of Oriental Medicine
“Robert Svoboda addresses Vastu, the classical Indian art (or science) of architectural form, in a wholly unique way. Instead of presenting lists of rules and architectural injunctions to which builders and interior designers must scrupulously adhere at all times, he sensitizes the reader to the dynamics of space, alignment, and form in ever-expanding orbits of individual life.”
Frederick M. Smith, Professor of Sanskrit and Classical Indian Religions, University of Iowa

AUSTRALIA POSTAGE-PLEASE NOTE: There is a temporary issue on shipping to Australia related to Covid-19. Please email us for information & additional cost before purchasing below. Thank you.

My intention in writing this tome has been to offer readers a more measured, more highly textured exposition of Vāstu than can be found in most other currently available books on the subject, without turning it into an academic, historical study. As it is, only a handful of sources, such as Bŗhat Samhitā, from which I quote extensively here, are actually ancient; and even had I wished to provide an account of Vāstu as it has been “traditionally” presented, there are no truly traditional presentations, for Sthāpatya Veda, from which Vāstu evolved, always existed more as a theoretical construct than a well-laid-out body of architectural knowledge.
Theory can be valuable so long as it is applied intelligently to the specific time and space in which it is employed; the principles of Vāstu emerged, as did the principles of Āyurveda, Jyotiša, and other Indian vidyās, slowly over generations as practitioners collected and codified real-world data in their own spaces and times. One can no more master Vāstu by mastering its conjectures than one can get the hang of medicine, music, and other hands-on lores by merely hanging on to their hypotheses. There is no substitute for experimentation, and it is those who accumulate at least some personal experience who will successfully employ the distillation of the accumulated experiences of others.

In this monograph I therefore focus on the concepts and practicalities that individuals who know little or nothing of the system of Vāstu can use to begin to gain the personal experience that they will require to make systematic use of Vāstu’s theories. What I present here is not a detailed exposition of the Vāstu Vidyā (however we may conceive of it), but rather a series of musings on Vāstu, through which I seek to sensitize the reader to the nuances of spatial awareness. I have deliberately integrated concepts from Āyurveda, Jyotiša, meditation, breathing practices, yoga, and the like into this work to create exercises for readers that may both illustrate Vāstu’s principles for them and also assist them to align themselves with prāņa which, as the base of all life and thus all knowledge, is the foundation of those fundamental principles that all Indian vidyās like Vāstu share.

My ruminations have led me to add to and subtract from what has appeared before. I have occasionally extended identifications unconventionally, as when I equate the directions with the guņas; and there is of course much that I have left out, including the Vedic notions of the east-west grid versus the north-south grid, which evolved by some obscure process into the Vāstu Puruša Maņďala. My reluctance to potentially confuse readers with yet another set of direction-deity designations also led me to omit describing how in a Vedic sacrifice offerings to the Vedic gods are made in the east, on the Āhavanīya fire; to the domestic deities in the west, on the Gārhapatya fire; and to the ancestors in the south, on the Dakšiņāgni fire (north was the only direction not to enjoy a major Vedic fireplace; it was where offerings were made to demons and spirits). And, I neglected to explicitly explore how Vāstu can be applied to all three realms of human awareness: the ādhibhautika (mundane), ādhyātmika (spiritual), and ādhidaivika (astral).

My aim in being neither too detailed nor too simplistic was to be accessible, to offer readers a taste of what Vāstu has been and is, and what it can offer; to provide them with practical tools for harmonizing the spaces of their lives; and to offer a pathway forward for those few who, after establishing in themselves a genuine sense of spatial alignment and directionality, become so keen that they may choose to try to become vessels for the Vāstu Vidyā. May the Vāstu Vidyā be pleased with what has been wrought!

One flower supports a universe!

Will be back to regular puja schedule at 6:30 am E

From @satya.mo Dear friends and family of New Eng